How to Transfer Land Titles in the Philippines

I recently experienced this so I thought that I should share the process of how to transfer land titles in the Philippines with other people. I can impart some tips that can be useful to you. It’s not easy but it can be done. The time frame is about 2-3 months. It could be done in a month if you have all the documents at hand, the money to pay the taxes and fees, time and the perseverance to follow through with what is necessary.

TIPS TO CHECK IF THE PROPERTY YOU ARE BUYING IS GOOD:

– Get a xerox copy of the title of the property
– Check it at the Registry of Deeds if the title is clean and has no notes on it (example: there might be litigation about it or if it has been mortgaged or made as collateral on a loan)
– Check at the City Hall if it’s under the owner’s name and if the taxes are paid (this can be a problem)
– You can go to the BIR to get an assessment of how much tax is going to be paid for this. It is the seller’s responsibility to pay for the Capital Gains taxes on the property but usually this is paid by the buyer. Depending on what kind of arrangement you have with the seller so this is something to consider because you won’t be able to go to the next step before taxes are paid.
– In my city, lawyers charge 1% of the amount that is on the Deed of Absolute Sale. They also require, check and get copies of documents that are needed before they notarize it. So if a property is sold at 100,000.00, the lawyers will charge 1,000.00. I don’t know if it’s the same with other cities.

a
Once you have everything in order, congratulations! You can start the process of Transferring the Land Title in the new owner’s name. There are basically three agencies that you would have to go to in this order: Bureau of Internal Revenue, Registry of Deeds, and the City Hall.

HOW TO TRANSFER LAND TITLES IN THE PHILIPPINES 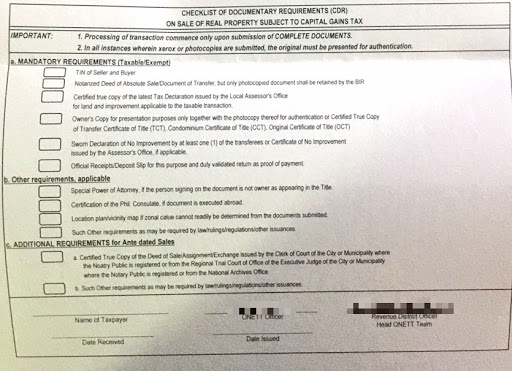 You have to get the Certificate Authorizing Registration from this office in order to move on to the next step which is the Registry of Deeds. If you don’t have the Computation for the Capital Gains Tax and Documentary Stamps, you can always ask one from them. Then they also check the TIN numbers if they are valid. They will also help you with the forms needed for payment and print it out in 3 copies. Then, you have to pay the necessary taxes. I paid mine at the Landbank of the Philippines. I went back to BIR to inform them that I had paid for it. Then they told me to get some documentary stamps and have the documents copied. I needed two sets of copies for everything. Once this has been completed, you have to wait and wait until your Certificate Authorizing Registration is ready. This can take from 3-4 weeks in my experience. Too much red tape and unnecessary bureaucratic steps in my opinion.

a
REGISTRY OF DEEDS or LAND REGISTRATION AUTHORITY

Once you have the Certificate Authorizing Registration and the documents accompanying it, you go to the Registry of Deeds and ask for the person that checks the documents. We didn’t have the Transfer Tax from the City Hall at the time so we were told to get it. Once we had that, the person rechecked the documents and asked us to go to the window where they encode the information. We were given a breakdown of what we had to pay. You can check with them on how much it is you need to pay. You don’t have to pay for it the day itself. They will give you a copy of the breakdown. From there, you can pay at the Cashier and you will be issued a receipt. Once you have the receipt, you go to the examiner. The examiner told us that it will take them 5-7 Business days. If it is done earlier, she asked me to put down my number so I can be contacted. They texted me about an additional fee that I have to pay a few days later. I paid that and sent them a text about it. I love the Registry of Deeds. This is probably the only place where I did not experience red tape. It was very straightforward, just have the correct documents and pay the necessary taxes as it should be. A week later, I got the new titles along with some documents like the Transfer Tax receipt, the receipt from Registry of Deeds, the copy of the Deed of Sale and the copies of the Certificate Authorizing Registration. All of these you’ll need at the city hall. The only problem I had with them was on the day of the releasing of the titles. I don’t know if it was just an unlucky day but both of those persons in charge with releasing titles were out of the office so no one can do it. For me, it was okay to go back even if I waited for at least an hour there because I live nearby but I felt really bad for the people who came from far places. They had to travel far and take the day off just to not have it available. It was very unprofessional and a bit careless for the government agency. The other employees though were really kind and very apologetic but they can’t really do anything because the person who has that job were not there. 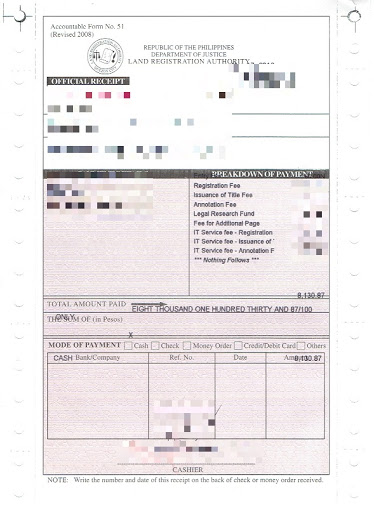 Once you have your new Transfer Certificate of Title, it is time to change the name of the owner at the City Hall. Since you most likely have paid everything like the Transfer Tax and you have Tax Clearance, you just go to the Assessor’s office so they can check the documents and encode it. Make sure you have copies available since that’s what they will get for their records. They will issue the new Tax Declaration of Property Value in the new owner’s name. Then you’re done. 🙂

How to transfer Land Titles in the Philippines? The experience was definitely not easy. There were just too many steps that are unnecessary in my opinion. Too many room for red tape and corruption. Props to the Registry of Deeds, they were very helpful and that was probably the only office that did not give me too much trouble or take too much time. You don’t have to know anyone and you can still get things done. I can see why there is a need for fixers. The process is a lot of trouble but you are sure that things are done and everything is in order. I had a relative that used a fixer only to find out later that they only did 2 out of 3 steps and left out one of the government agencies which is a lot of trouble now. I also know another person who tried to use a fixer but they only got stuck because the fixer was probably busy and just held on to their money. Fortunately, they got all those back and just processed it themselves. I guess if you do use a fixer or an agent, be vigilant with everything. Make sure that everything is in order.

2 thoughts on “How to Transfer Land Titles in the Philippines”