The Grillery Tarlac is a new restaurant along Bypass road in San Sebastian at the back roads of SM Tarlac. That street is becoming a restaurant row with all the new restaurants popping up in the last 10 months. I must say that the play looks really good. You can describe it as very instagrammable. The decor is on point. The lights and event the fans are very industrial chic. Price is mid range. They serve mostly grilled meats and alcohol. The food however is a different story. You can read more on the post.

There are plenty of indoor seating and also outdoor. I think you would prefer the outdoors if you are the smoking type. They have fans anyway. They also have ample parking outside. 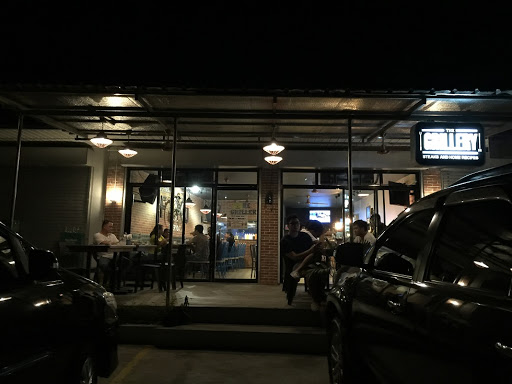 I really like the feature wall with the bike. I think they really maximized the space by having bench seating along the wall and tables can be configured depending how many people are there in your group. There are also a couple of benches on the other side of the room. 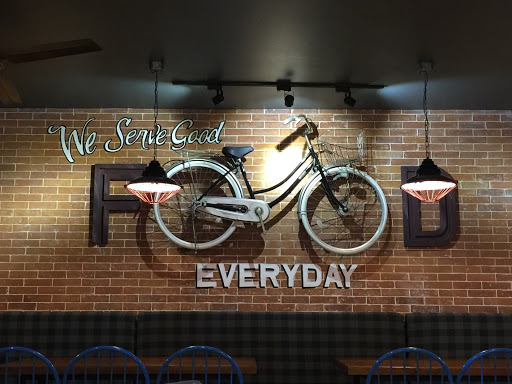 Across the entry is their grillery where you can see the open kitchen. On the right side is the bar. 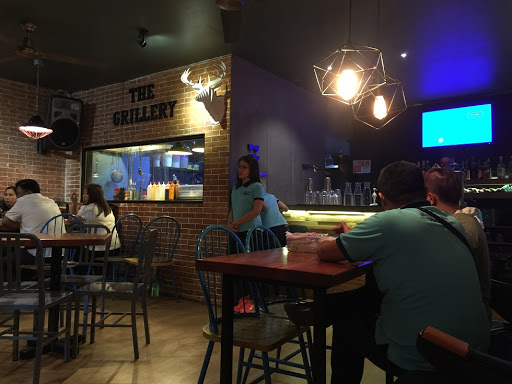 MENU AT THE GRILLERY TARLAC

We were given the menu upon choosing a table. They have starters ranging from 130 pesos to 210 pesos. We were going to order the Krema Mussels at longganisa but it was unavailable. We asked the lady which she would recommend so we ordered the Porterhouse Steak and the Tenderloin Steak per her recommendation. She asked us how we want our meat cooked. I chose medium well and my friend chose well done. 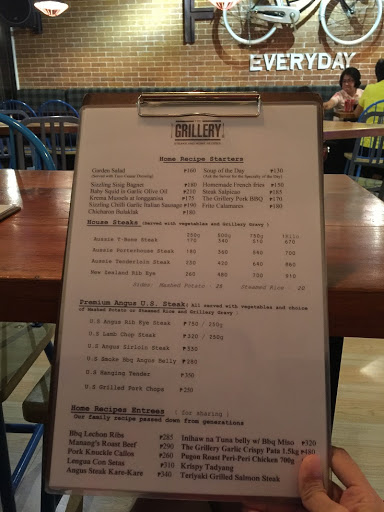 They had a lot of drinks. 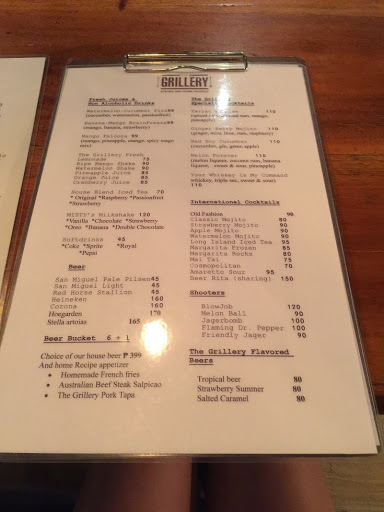 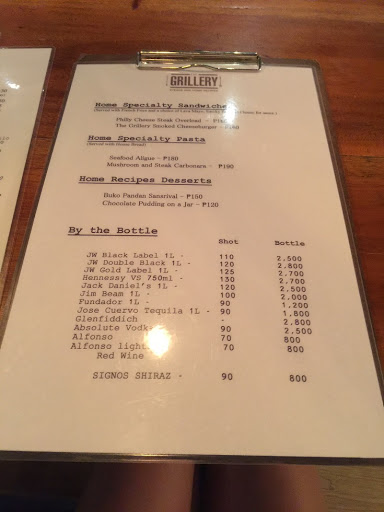 They gave out utensils in this cute cup. 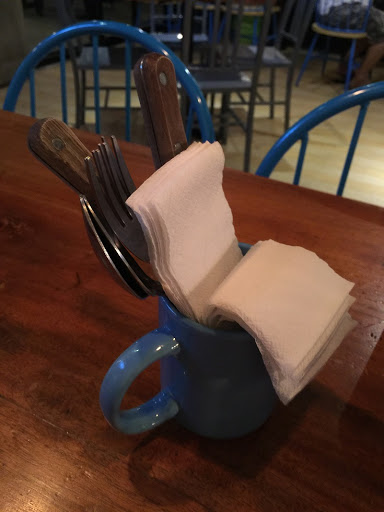 FOOD AT THE GRILLERY TARLAC

My friend ordered a watermelon shake. 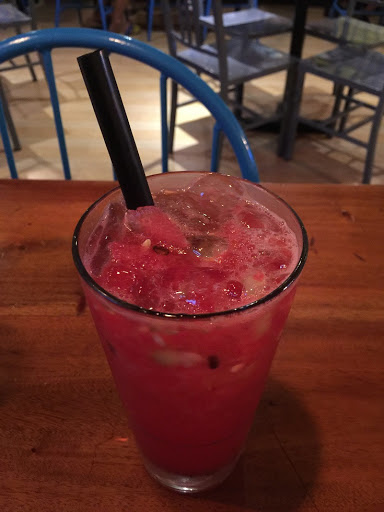 This was my Tenderloin in 250 grams for 230 pesos. It came with a side of a few pieces of vegetables and gravy. I ordered mashed potato on the side for 25 pesos. 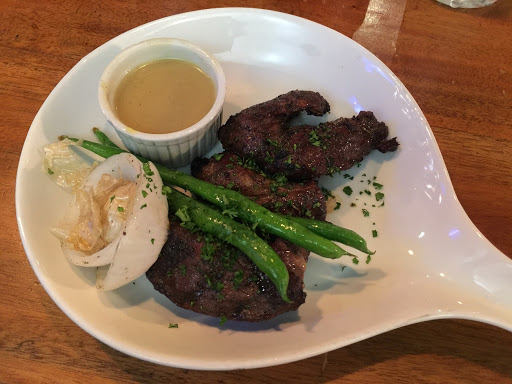 This is my friend’s Porterhouse steak at 250 grams for 180 pesos. She ordered a side of rice for 20 pesos. 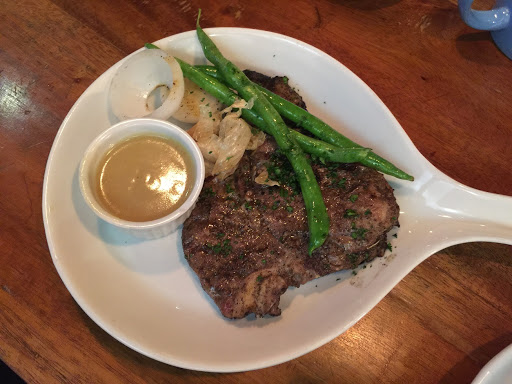 Honestly, whoever mans the grill doesn’t know how to cook meat in my opinion. I think they cook them in very high fire that’s why the inside is raw. The meat was also very chewy. It was really hard to eat. We both weren’t able to finish our food because it was just really hard to eat. I asked the waitress if I can have it recooked because the inside was still raw. When, they returned it and I was cutting through it, it was still raw. Only the outside was cooked. I just lost my appetite and didn’t want to return it the third time. I just gave up on the food. It would be nice if they can retrain their cooks on how to properly grill meat since that is their specialty. My friend’s porterhouse was also raw inside and she asked for it to be well done. She also didn’t finish hers because we didn’t want to eat raw meat. 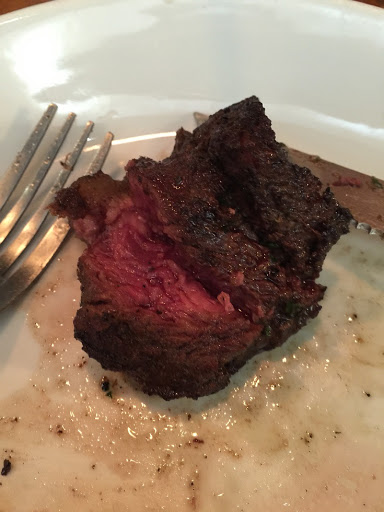 Another nice thing despite the dismal food was the live acoustic music. I think they only have this on the weekends and at 9pm and onwards. 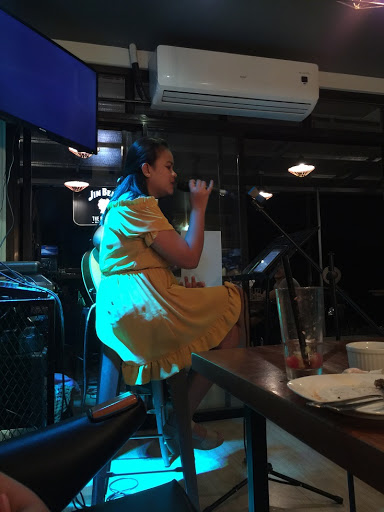 The Grillery Tarlac for me has a really nice concept. The place looks great. The ambiance is very nice. The acoustic music is really nice too. They just forgot about the food. But you go to a restaurant for food, everything else is secondary. I bumped into a friend the other day and we were talking about the new restaurants in town. She also had the same opinion about this – that the grilled meats are not cooked right so it’s not just me. I hope they can improve on that and maybe the experience will be different on my next visit. 🙂

2 thoughts on “The Grillery Tarlac”