The present Terminal 1 building was completed in 1981. It is the second oldest terminal. It has an area of 67,000 square meters.  It was designed by Leandro Locsin, a national artist of the Philippines for architecture. However, it is way past its glory. It had recently undergone a bit of cosmetic renovation which is good because we were named as one of the worst airports in the world for a few years. According to the MIAA website, “The 16-gate terminal currently services all international flights coming into Manila, except for those operated by Cebu Pacific Air, PAL Express, Philippine Airlines, All Nippon Air (ANA), Delta Air Lines, KLM Royal Dutch Airlines, Emirates Airline, Singapore Airlines and Cathay Pacific Airways.  Its 84 check-in counters and 22 immigration stations process the daily stream of passengers departing for various worldwide ports, while 20 immigration and 26 customs stations speed up the flow of arriving travelers”.

SHOPS AND RESTAURANTS OUTSIDE THE AIRPORT (AT ARRIVALS AREA): Jollibee, food stalls

NAIA Terminal 1 had undergone some cosmetic renovations in the past year. They changed the carpeting and ceiling. The stores have improved a bit. It also seems like they did some repainting.
a 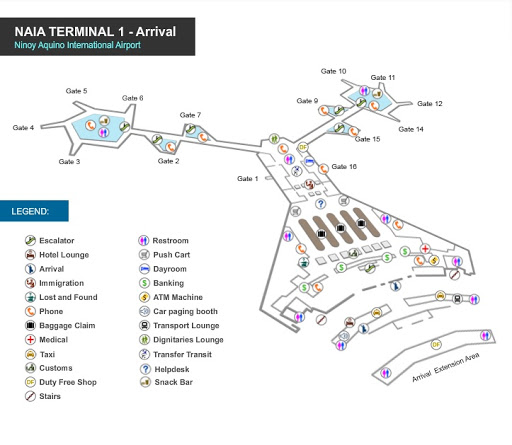 BANKING AND CURRENCY EXCHANGE: Info can be found here.

SHOPS AND RESTAURANTS OUTSIDE THE AIRPORT: None

AIRLINES THAT OPERATE IN THE TERMINAL: Philippine Airlines, PAL Express 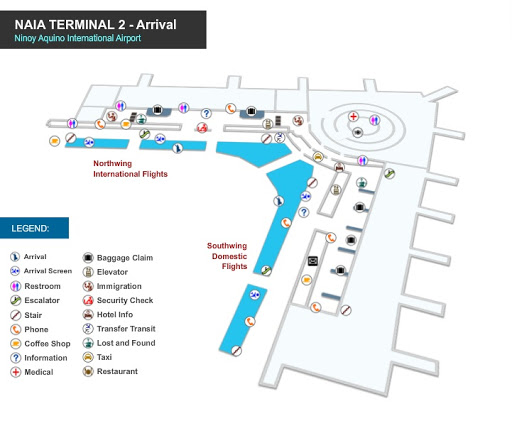 NAIA Terminal 3 is the newest and biggest of all the terminals. The terminal building has a total floor area of 182,500 square meters. The terminal officially opened in 2008. Cebu Pacific flights use this terminal. The building has 4 levels. Retail shops and food courts are located on level 3. Departures are at Level 3 while arrivals are at Level 2. Terminal 3 can handle 13 million international passengers annually. The center of the building contains the head house where passenger processing is centralized. A total of 20 boarding gates and 140 Check-In-Counters can accommodate 4,000 peak hour one-way passengers. It has two areas, the south wing and the north wing. It divides the domestic and international gates.

This is what I remember from Terminal 3 food court last time I was there and with a bit of research on the internet. I know it’s constantly changing with new shops that are opening. So, I welcome any changes or corrections you can suggest if you’ve been there more recently than I have. 🙂 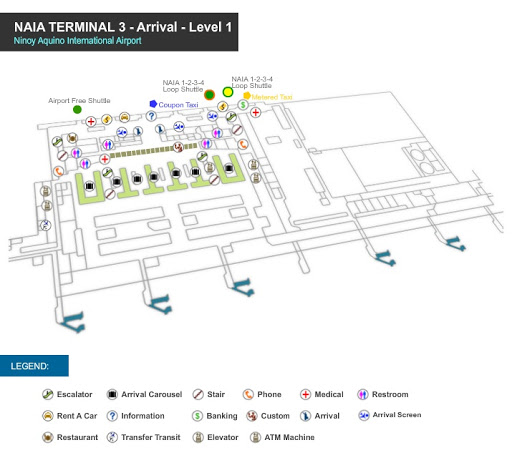 It is also known as the Old Domestic Terminal. It is the oldest out of all the existing terminals built in 1948. It was intended to be a domestic terminal but international flights of Air Asia Zest also operate here. There are no bridges so passengers walk to the airplane. The departure hall has a limited capacity of 969 people at a time. 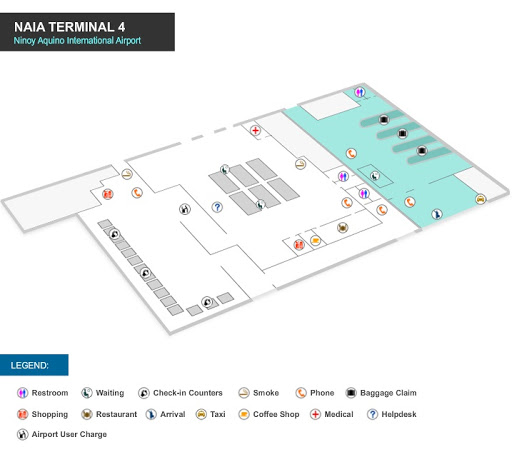 – Wear comfortable clothes
– Make sure you have your travel documents with you
– Bring a pen.
– Bring snacks (if you are traveling on a budget airline, food is not included). My mommy friends said that is a must with a child in tow.
– Bring your medication (with prescription if necessary)
– I always a bring a change of clothes in my hand carry just in case of any emergency (especially if your check in luggage does not arrive with you, it already happened to me once)
– Ideally, be at the airport 3 hours before for international departures and 2 hours before domestic departures.
– Make sure you have all of your things after the security check. My friend forgot to get his Rayban glasses and another passenger took them. It was an elderly person too.
– Never leave your belongings unattended. Always remember that you are responsible for whatever it is you bring.
– Fill out the forms when you can (while you’re on the plane) to save you time and the trouble. They usually give out the form before landing so you have ample time to fill them out.
– Get a cart for your luggage. If you don’t want assistance from a porter and pay for their service later, politely decline.

a
I hope that this NAIA Guide of the Ninoy Aquino International Airport helps you in some way especially for the first time travelers. I know it can be overwhelming sometimes. It would be nice to read on new information just to have an idea of what to expect.