We took the Berlin Free Walking Tour on a really cold day in January – not the best idea. The weather was probably -3 and feels like -10. We were freezing the whole time and most of it was outdoors but we pushed through with it anyway since we can’t really control the weather and we don’t know when we’ll go back to this city. It was just like Yolo! Haha.

Sandeman’s is the company that does the The Berlin Free Walking Tour we availed. The company has several free tours a day. I don’t know if they have more in the summer than in winter but I would guess they would. Currently, the scheduled tours are everyday at 10AM, 10:30AM, 11AM, 11:30AM, 2PM and 4PM. The tour starts in East Berlin and the meeting place is at the Starbucks at the Brandenburg Gate. If you take the metro, it’s really close to one of the exits. The stop is Brandenburger Tor.

The Tour takes 2.5 Hours and includes:

Of course, there is no guarantee that you will see all of this. They will try to let you see most of it. I think it’s always a good way to grasp or see what is in Berlin like an overview and you can always go back to sights that interest you the most after on your own time. There is a break in between and they take you to a coffee shop where you can use the rest room or get some coffee or snacks. You can also avail of the paid tours here if you are interested.

So, we start our tour at the Brandenburg Gate. 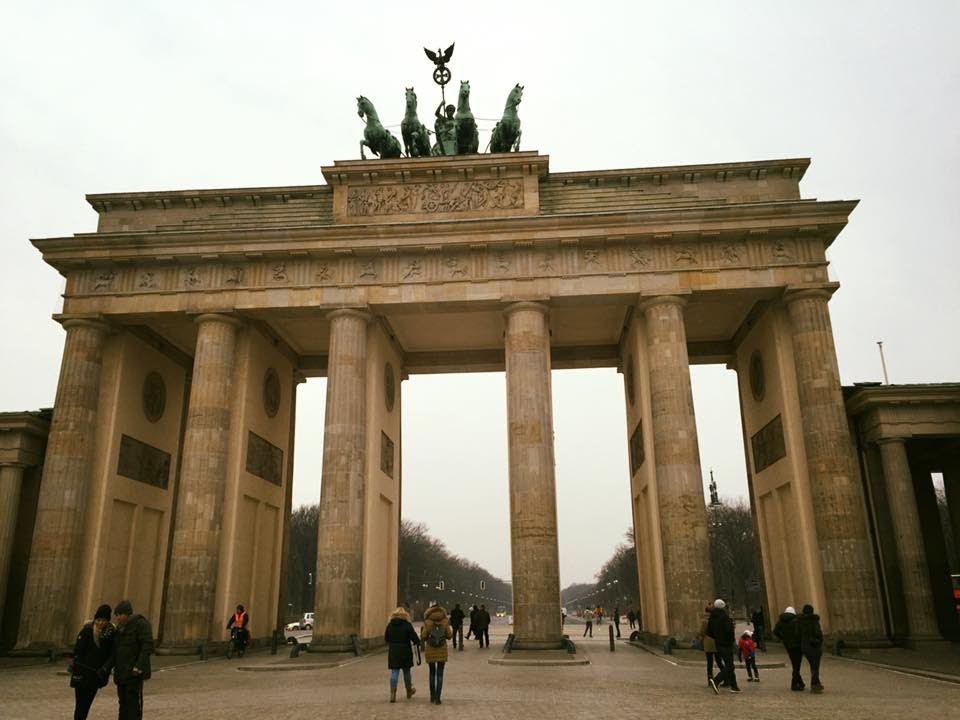 Our tour guide was a lovely lady and like a lot of young people in Berlin, she is from another country in Europe and decided to stay in Berlin. After the Brandenburg Gate, we walked to the Holocaust Memorial. 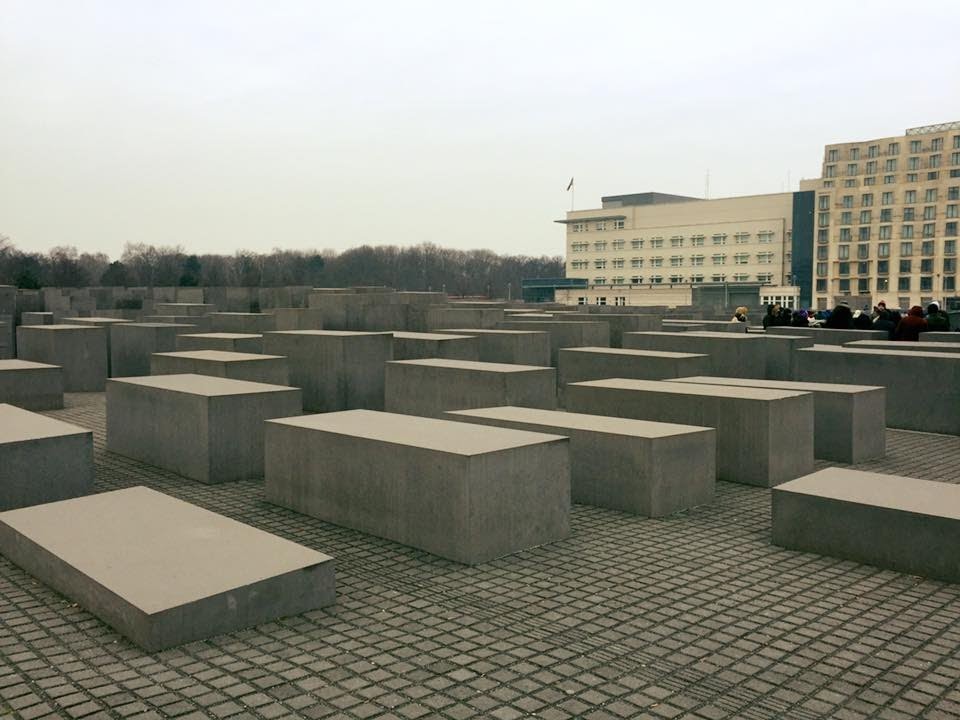 It is also known as the Memorial to the murdered Jews of Europe. There is an underground museum that you can visit if you wanted. They are basically cement blocks in different shapes and sizes. Our tour guide said that the architect was criticized for having made something so simple. According to Eisenman’s project text, the stelae are designed to produce an uneasy, confusing atmosphere, and the whole sculpture aims to represent a supposedly ordered system that has lost touch with human reason. The Foundation Memorial to the Murdered Jews of Europe official English website states that the design represents a radical approach to the traditional concept of a memorial, partly because Eisenman said the number and design of the monument had no symbolic significance. However, observers have noted the memorial’s resemblance to a cemetery. Source. 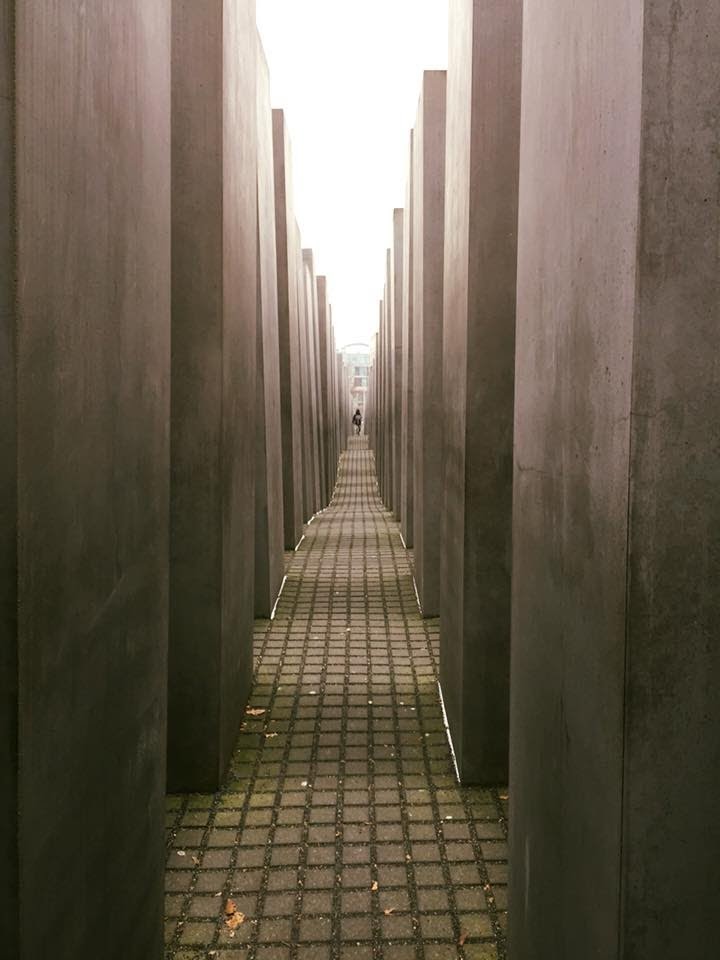 We also passed Hitler’s Bunker where he committed suicide along with his partner. Then their bodies burned on the ground. Currently, it’s a public parking lot and the bunker is still buried underneath. We also went by the Mall of Berlin, outside of it and our tour guide was discussing other tours that we can avail. We were really cold and not really interested with the tours and so I talked to my cousin for a bit. Then one girl in the group shhhhhed us and we were not even loud. We knew it was towards us because she made a very racist remark after and said: Asians! We were the only Asians in the group and very upset by this time. It was very cold and that was uncalled for. You can’t really pick the people in your group and how they behave.

After this, we passed by a section of the Old wall. 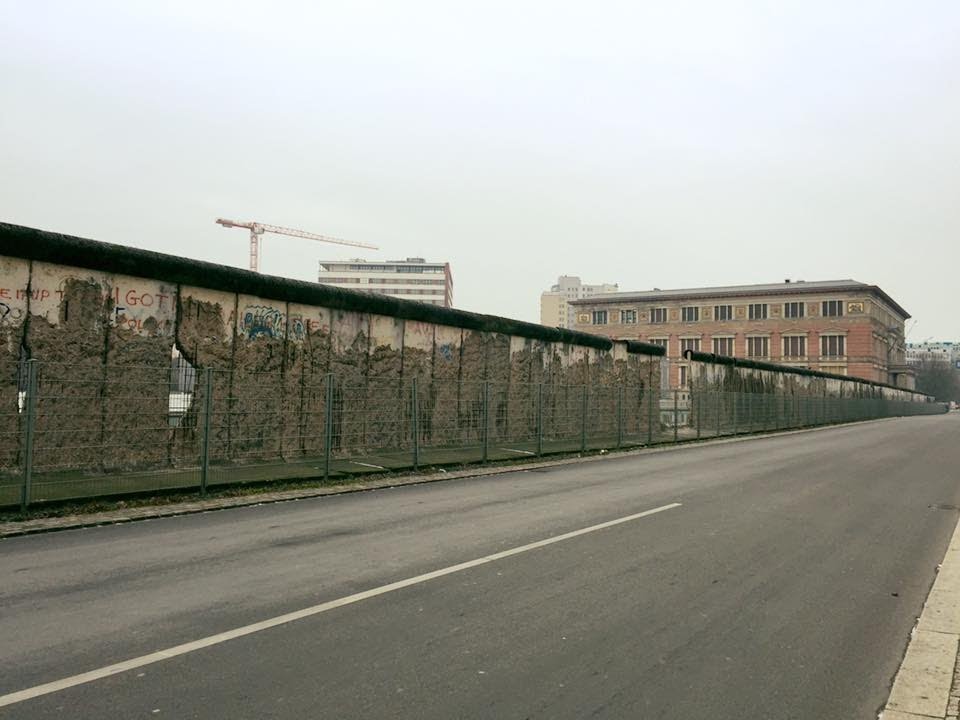 Then, we went in the coffee shop for a 30 minute break. After that we went on the tour and passed by a museum.

Then, it was the famous Checkpoint Charlie. She said that the picture is just a random soldier and it wasn’t even there to begin with but people or tourist kept asking about Checkpoint Charlie so they finally built one where it stands now. 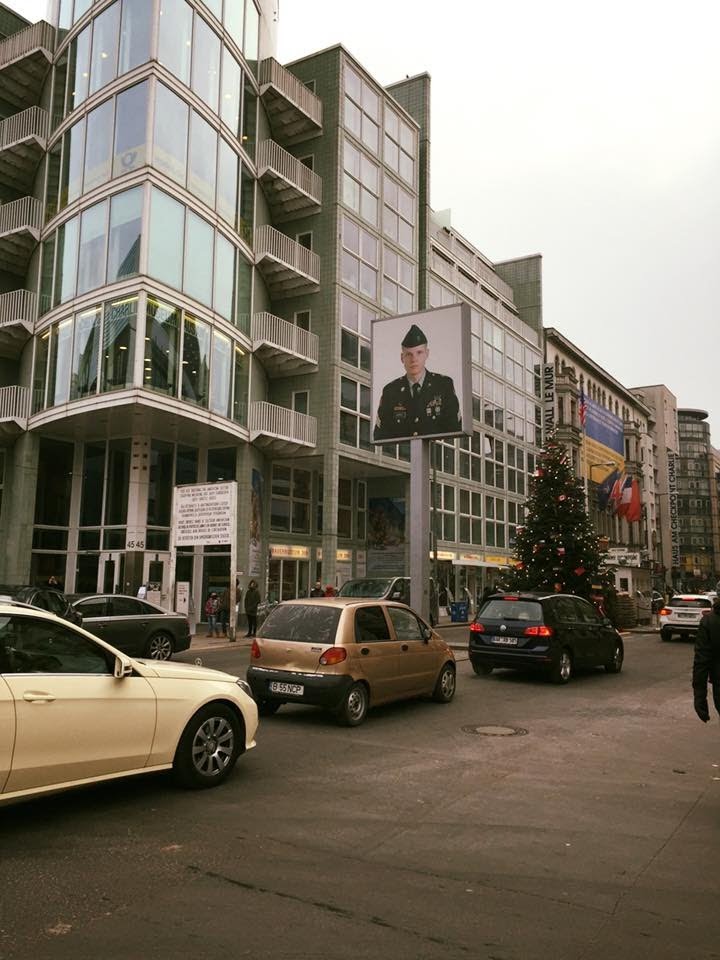 We passed by these cute and colorful travi cars. They were made famous by those mentos commercials when I was a kid. 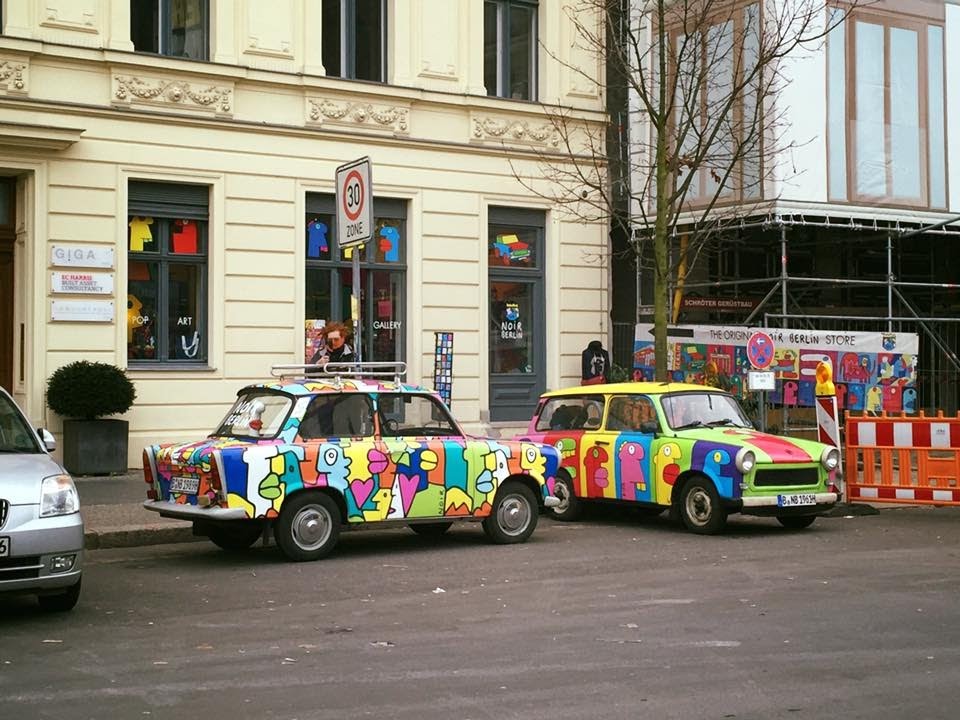 We also this cute currywurst wagon that looked like a mini firetruck. 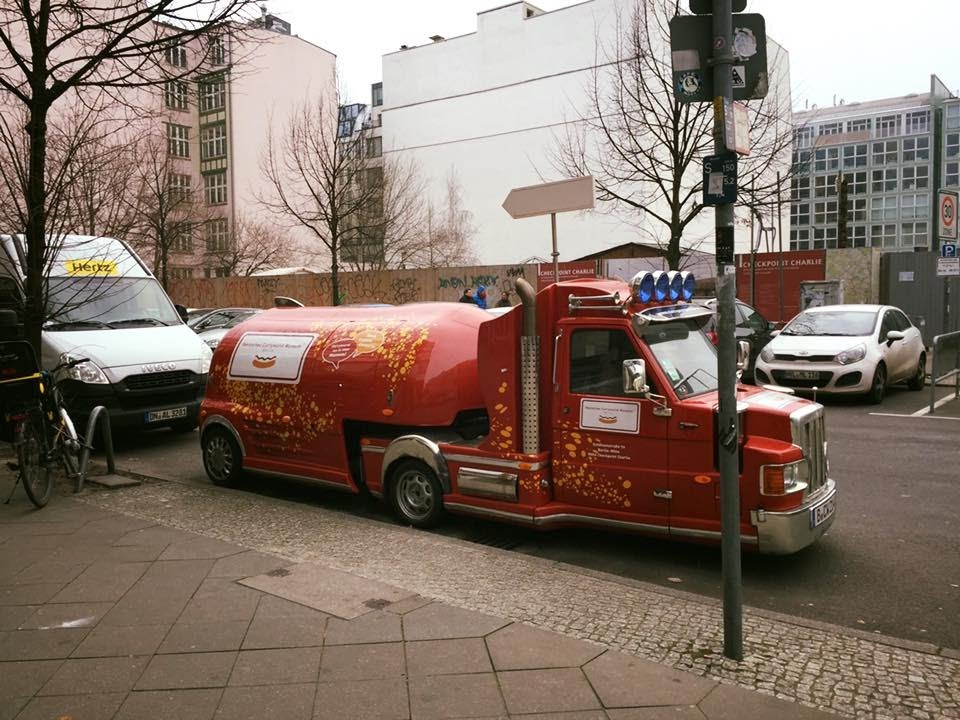 We passed by the French and German cathedrals which looks identical from a distance. They were across each other. Then, we walked a bit until we reached the Humboldt University where our tour ended. 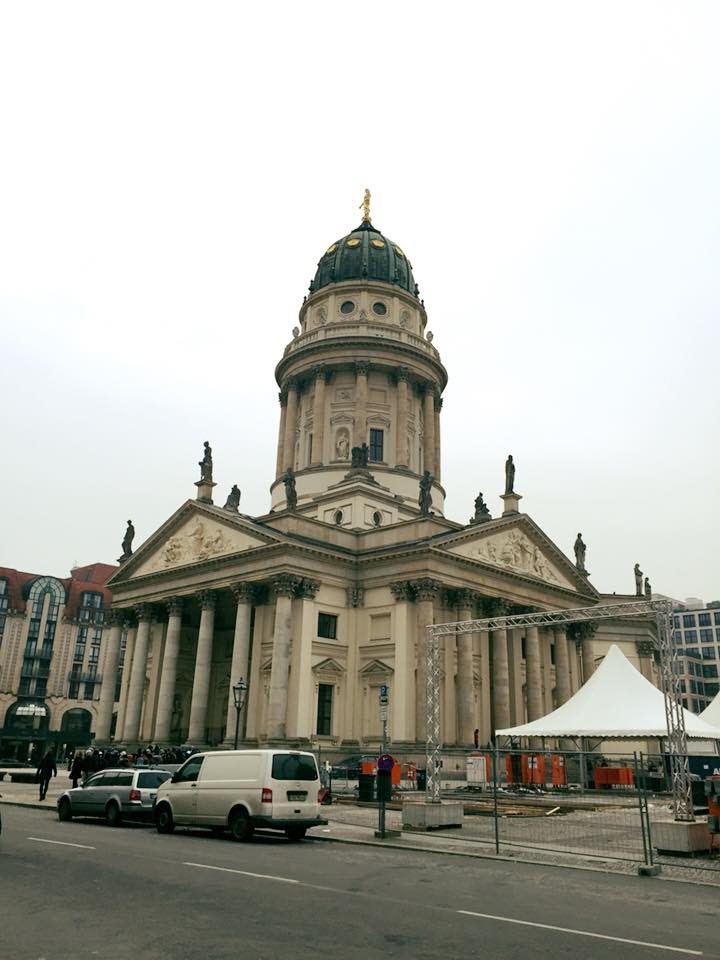 We took a shoe selfie to commemorate our Berlin Free Walking Tour. It was enjoyable despite the cold weather and the racist encounter we had but all in all, it was fun. You do walk a lot on this tour compared with other tours as it covers a lot of area. As most Sandeman Tours, you give the tour guide a tip of how much you think the tour was worth. 🙂 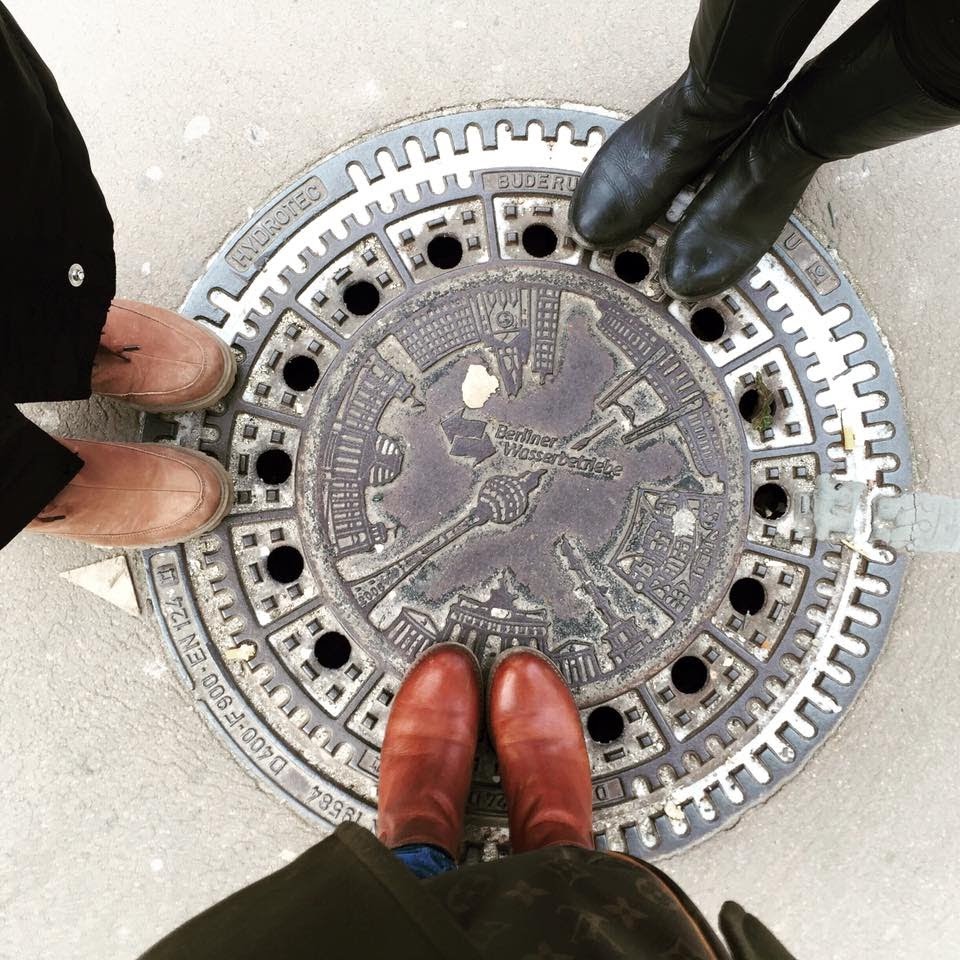 The tour ended at the beautiful Humboldt Universitait. 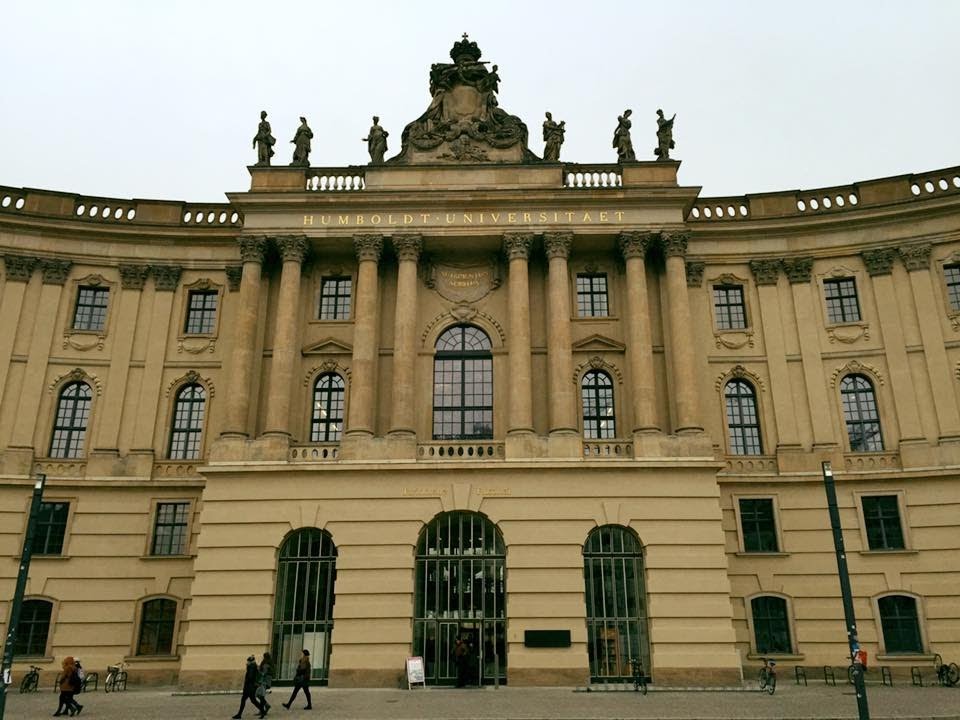